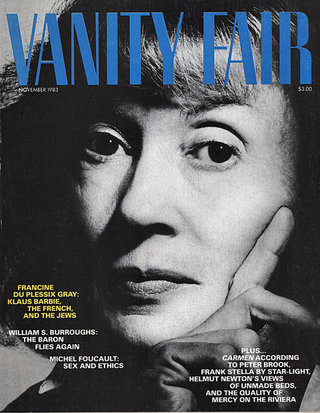 It was a long time ago, and the memories are starting to fade, but when I heard last week that Francine du Plessix Gray had died, at the age of 88, it reminded me, once again, of the best piece of writing advice I ever got. It's advice that I've adhered to since that autumn afternoon in 1975, in her office in the English department, at the City College of New York, when she showed me a spiral-bound notebook, the latest volume of the journal she'd been keeping since the summer of 1951, and said, "Keep a journal; write in it every day."

It was, she explained, how a writer finds his (or her) voice—by making writing as natural as breathing.

There were other bits of useful advice that Francine—we called her "Francine," not "Professor Gray"—shared with her students, advice of the sort you wouldn't normally get in a CCNY writing workshop. Like (and I forget her exact words, but the message was clear): Edit your own work when you're stoned on marijuana. You'll have no tolerance for bullshit and unnecessary verbiage.

Francine arrived at CCNY for the Spring 1975 semester, slated to teach one graduate and one undergraduate nonfiction writing workshop (what would now be called "creative nonfiction"). I met her my first day back at school—I'd gotten my BA in creative writing and then taken off a few months to travel. Now I was about to embark on a course of study in the graduate literature program after having been rejected from the creative writing program, which, at the time, I saw as the key to my future. I was 21 years old and crushed. The writing program at City College, in those magical days of free tuition, was a promised land where, for little more than the cost of books, one could study under the tutelage of Kurt Vonnegut, William Burroughs, and Joseph Heller, the department chairman, who had personally rejected me.

I thought studying literature might be a constructive way to kill time while I figured out what to do with my life.

I was wandering through the English department—a quonset hut on South Campus—attempting to put together a not-too-demanding schedule of classes, when a woman, fashion-model tall with blonde hair and wearing a Viva magazine T-shirt, asked me, with the slightest hint of what I took for an indeterminate European accent, if I knew where the administration building was.

"New here?" I inquired after giving her directions. I thought she might be a night-school student.

Yes, she replied, she'd just been hired to teach a creative writing workshop.

She asked me other questions about the college, and in the course of our conversation, I told her that I used to edit one of the student newspapers and that I'd been rejected from the creative writing program.

What happened next still seems miraculous. Francine asked me to bring her some of my stories that had been published in the newspaper. I brought her a half-dozen samples of my work, and when I returned to her office later that afternoon, she looked up from my articles, spread out on her desk, and declared, "This is gonzo!"

Because Francine never talked about it in any detail, all I knew about her history was what I read in the short excerpts about her European childhood—governesses, a Russian mother, Paris—that she showed the class from the autobiographical novel she was writing at the time, Lovers and Tyrants. Had I heard that her stepfather, Alexander Liberman, was the editorial director of Condé Nast, it would have meant nothing to me. I'm not sure I knew that Condé Nast was a magazine-publishing company.

But what was really important to me about Francine was that she taught creative writing in a way that none of my other teachers had. Where Heller, for example, said that there was only one way to write a story—well-plotted with a beginning, middle, climax, and end… no deviations and no sci-fi, supernatural, or detective stories—Francine believed the best way to write was in fragments. Don't think about plot or form. Just get something good down on paper. Trust your unconscious and eventually the fragments will congeal into a coherent whole.

Rather than stories, she assigned fragments. Start from the inside and work your way out: first describe an emotional experience, then a small space, then a person, then a larger space, and keep going until you finally work your way up to describing a historical event.

This made sense to me and I flourished.

Once a week, after she taught her undergraduate class, we'd sit together in her little office in the English Hut, as it was called, critiquing stories, with me, on occasion, alerting her to an unexpected gem.

It went on like this for two terms, during which she guided me though my first attempt to get a full-length book off the ground, reading and editing my rough drafts. After I'd badly missed the mark on one of her assignments, she made a prediction: "You're going to write darkly humorous books and travel around the world."

And our bond became stronger because we were both plagued by a stutter that came and went depending on how stressed we were. Writing was a way to express ourselves fluently.

Francine left City College in 1976, returning to Connecticut and a life of writing books (At Home with the Marquis de Sade, World Without End, October Blood, and Them, among others) and magazine articles, including covering the trial of Gestapo chief Klaus Barbi for Vanity Fair, which won a National Magazine Award for best reporting.

I somehow muddled through my final term of grad school without her.

Over the years, we'd exchange an occasional postcard, but by the mid-1980s we'd fallen out of touch. I now wonder if she was aware that her prediction had come to pass.

Yes, Francine, there have been a handful of "darkly humorous" books and there has been much travel to distant lands to talk about them. And I often think of you when I write in my notebook—which I still do every day.