At the request of many Cher fans I have known over the years who bought both The Cher Scrapbook and Essential Cher, I decided to do a different book as a follow up to Essential Cher that included more on Sonny. But it never happened.

I should have known that the first and second generation Sonny & Cher fans like myself would want to  see more on Sonny. I still have plenty of old Sonny inteview material left over that I haven't used yet.

I had an offer to do a Sonny & Cher book, but I ddin't follow through with the publisher.  Life got in the way and I couldn't devote the time it required to be done.  It would have been a very big undertaking  and I knew I would have never made the deadline or even the extended deadline. Boy, when life gets in the way! I know I let  a lot people down and I'm sorry for it.

I still think about it. Maybe I should do something on a smaller scale. Let you know!

Top 40 US Hit Singles of the Eighties

It's not unusual for a performer of Cher's status to attach a "rider" to their concert contract. This list does not include all Cher's needs, nor is it in any kind particular order.

1. A wig room
2. Several bottles of Evian bottled water
3.  Two cube-shaped  boxes of Aloe Kleenex
4. A dozen Solo cups that have to be a certain color.
5. A bowl of plain M&M's
6. Flowers, but only Casa Blanca Lilies or Gardenias
7. Two couches—one  a three-seater the other a two seater
8. A television with a DVD and cable hook up
9. A large separate room for a massage table
10. Two bottles of red and white wine 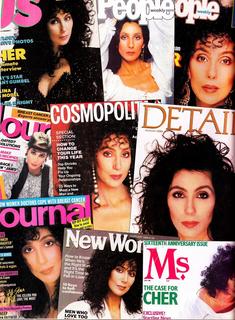 Through an internet poll, hundreds of fans were asked to pick their Top 10 favorite  recorded Cher songs. This  list in not in any particular order.

Grammy for "Best Pop Dance Recording"—"Believe," (1999) Academy Award for her role in Moonstruck opposite Nicholas Cage (1988), Cannes Film Festival Award "For Best Actress" in Mask (1985), and four Golden Globes (for Moonstruck, Mask, Silkwood and Witches of Eastwick), Golden Globe "For Best TV Actress in Musical or  Comedy" for The Sonny & Cher Comedy Hour (1973)

In November 2002, Citadel Press published The Cher Scrapbook. I was elated to say the least!  It was my second book on Cher. My first one was a quickie biography trade book released briefly in 1988 that saw limited distribution (much to my dismay), though it was with a major publishing house. Though it’s been more than a decade (boy, did that go fast!) since the release of The Cher Scrapbook, I thought it was time to do something a little different—an ebook that’s an informative and easy read. I love the portability of ebooks, too.

For years many die-hard Cher fans asked me for some kind of follow up edition and more recently my Cher friends on Facebook  and Twitter weighed in with their suggestions, too. So, for now, I incorporated all your great ideas and added a few new ones.  For those fans who like to take Cher everywhere they go, The Essential Cher  will be right at your fingertips on any of your mobile devices.

Some of these sections may look familiar, but you’ll see I added a lot of new material including revised Top 10 lists, newer facts and stats as well as a new quiz, the tour set lists and where to find the best Cher sites on the internet. I kept some of the original side bars and photos that are still relevant today. Most were the original chapter opening photo spreads.

As I was compiling all  this new information, I realized I had more than enough to make an additional book. Again, reader suggestions came back to include the Sonny & Cher years.  In any case I hope you like The Essential Cher and understand that it was intended to be a quick and easy read ebook, and not an extension of The Cher Scrapbook. Let me know what you think. 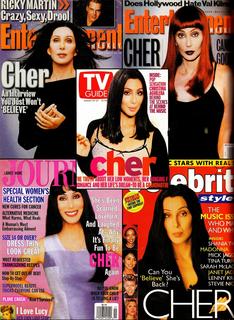 From the author of The Cher Scrapbook comes Essential Cher.. This ebook guide is intended to be a quick and fun read for those loyal fans that like to take Cher everywhere they go. It's everything Cher from quickie facts and stats to Top 40 song lists and outrageous quotes and tweets.  Plus there's a cool quiz, complete track listings to all Cher's solo recordings from 1965's All I Really Want To Do to 2013's Closer To The Truth together with a list of Sonny Bono penned songs recorded by Cher.  Want to know all the Phil Spector songs Cher once sang back up on in the early 60s? It's in The Essential Cher, as well as a detailed discography, filmography and how to navigate the best Internet sites on Cher and much more! 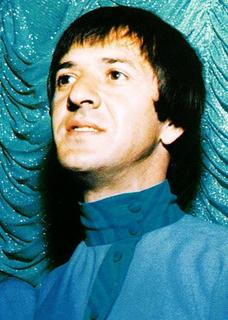 From the early sixties to the mid-seventies, Sonny Bono wrote a good portion of the Sonny & Cher and Cher solo songs. This is an abbreviated list of the more popular ones.

The Superheroes Movies Trivia Quiz Book: Unofficial and Unauthorized
Are you the ultimate superhero movie fan? If so, you will enjoy this entertaining and equally as challenging 160 question quiz pop culture book. Test your knowledge on Batman, Superman, Spider-Man, Iron Man, Thor, Captain America and many more big screen superheroes. There’s also a few of your favorite villains tossed in for good measure.
The Essential Cher